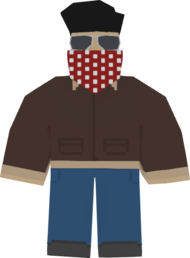 A player as often depicted in some official artwork.

The player, also referred to as a survivor or character, is the customizable playable character in Unturned (version 3). In order to survive, players must maintain their basic survival needs, while also fending off a hostile environment. Each individual player is considered the protagonist of the game.

Characters start with a randomized look, but can be customized from the main menu. With the Permanent Gold Upgrade DLC, players may have five separate character slots. Otherwise, the player only has a single character slot that can be used. Characters have a public name that is shown to everyone on a multiplayer server, and a private name that can only be seen by a character's fellow group members. Each character can choose a skillset, which provide the benefit of keeping certain skills upon death. Under certain conditions, a player character's skillset will also determine what items the player spawns with, if any items at all.

A character's initial appearance is randomized. Players can customize their survivor's facial expression, hairstyle, skin color, and handedness. Some of the customization options and styles are locked behind the Permanent Gold Upgrade DLC. This includes RGB sliders for hair, beard, and skin color. Without DLC, players are provided a handful of colors to choose from.

Players can set a premade Steam group to be used for default in-game group affiliation while on multiplayer servers. Any other players who are in the same Steam group, have selected that Steam group to be their default affiliation, and have not left the in-game group on the multiplayer server, will automatically be considered ally groupmates. Players can also customize the color of their marker, which is seen on map menus by the player and their groupmates. 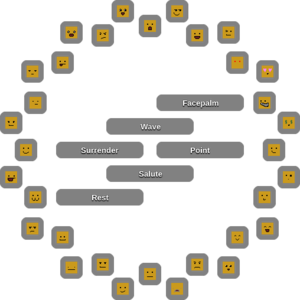 While in-game, players can perform animated gestures. There are a total of six gestures that a player may perform. They can facepalm, wave, surrender, point, salute, and rest. The rest and surrender gestures are unique in that the gesture will persist until the player manually chooses to stop performing the gesture. During the surrender gesture, players can be arrested with Handcuffs or Cable Ties. The other gestures only last for a couple of seconds.

Players can obtain cosmetic items as a part of the game's integration with the shared Steam Economy ecosystem. While in-game, players can disable the viewing of their equipped cosmetic items via toggles from their inventory.

Cosmetic clothing items will appear over the player's body when equipped, regardless of whether or not the player is wearing normal in-game clothing items under them. Although a few in-game clothing items—particularly those with bright lights such as Military Nightvision—will be shown instead of the player's equipped cosmetics. Players may also equip item and vehicle skins. Item skins are visible when held by the player, seen in inventory menus, or displayed in a display case. Vehicles can be skinned from the vehicle's context menu, as a toggle. Some cosmetic items may have a mythical effect attached to them.

The player stores the items that they loot in their inventory. Players have a limited amount of inventory space, which is largely dependent on their worn clothing items. In single-player, survivors will spawn with a set of clothing, based on their chosen skillset. On multiplayer, players spawn without clothing by default. Although servers can create custom starting loadouts, which are assigned to players based on their skillset. Regardless, players always have access to a five-by-three (5 × 3) inventory space labelled as "Hands", a primary held item slot, and a secondary held item slot. Many items can be assigned a hot key, so that they can be quickly accessed without needing to open the inventory menu. Players are also provided a default melee weapon, in the form of their fists. Fists are useable whenever the player is not currently holding an item.

In addition to the inventory menu, players have access to an crafting tab, skills tab, and information tab. The crafting menu can be used to break down unwanted items, refill magazines with ammunition, repair items, or create entirely new gear. Players can level up their skills from the skills menu, at the cost of experience points. The information tab can be used to view the map, accepted quests, current group, selected radio frequency, and player list.

When a player is not holding anything in their hands, they default to using their fists. Fists are considered a melee weapon, although it does not have a power attack. Instead, the player can attack with either their left hand or their right hand.

A player's status and wellbeing is represented by UI elements that take the form of percentage bars and effect icons. There are six status bars that the player must maintain: health, food, water, immunity, stamina, and oxygen. The behaviour of these status bars are significantly affected by upgrading Skills.

The player's health represents their physical well-being. Health will decrease when taking damage, such as from zombies, traps, or firearms. If the food, water, immunity, or oxygen status bars reach zero, the player will begin to rapidly lose health and die. The player dies immediately when their health reaches zero. A common way to replenish health is through consumable items, such as medicine. Upgrading the Healing skill increases the effectiveness of used medical items. Players can also replenish their health by maintaining their food and water status bars. When both status bars are at 90% or greater, the player will slowly regenerate their health.

A player's immunity decreases from exposure to the virus, and other sickly interactions. Zombies, radiation, and rotten or dangerous food are the most common reasons for immunity to deplete. Additionally, once a player's immunity is below the 75% threshold, it will slowly but continuously decrease over time. Immunity is primarily restored through medicine, although some other consumables may also restore immunity. Upgrading the corresponding Immunity skill improves the player's ability to withstand sources of immunity loss.

Stamina is only used for sprinting and jumping. There is no harmful effect from fully depleting stamina, and it will replenish over time after a brief delay. Stamina consumption is also affected by the Exercise skill and Parkour skill, which improves the player's ability to sprint and jump respectively, while also reducing their rate of stamina consumption.

Oxygen is primarily used for breathing while underwater or at high altitudes, and it too will replenish on its own over time. However, when oxygen is fully depleted, the player will begin to lose health. Oxygen is also consumed when the player holds their breath to steady their scope sway, but reaching 0% oxygen from this will not harm the player. The player can breathe underwater and steady scope sway for a longer period of time by upgrading the Diving skill. Upgrading the Cardio skill increases the rate at which both stamina and oxygen will regenerate, though the initial delay will be unaffected.

Status effects are temporary conditions that affect the player character. They are primarily bad afflictions, which debuff the player and make it harder for them to survive. These debuffs will typically influence, or be influenced by, the player's health status bar. However, some status effects are beneficial to the player.

The bleeding and broken bones debuffs are both affected by the Strength skill, which reduces the amount of damage taken from bleeding and falling, as well as allowing the player to fall a greater distance without breaking their legs. Difficulty settings also change the behaviour of these debuffs. On Easy difficulty, both debuffs are disabled entirely. On Normal difficulty, bleeding and broken bones are enabled, but will automatically be healed after a period of time (this delay is also improved with the Strength skill). On Hard difficulty, they will never automatically heal, requiring more urgent attention from the player.

The sheltered and warm status effects are both beneficial. The sheltered buff occurs during a blizzard when the player stands underneath shelter, such as inside buildings, vehicles, and player-built structures. The warm buff occurs when the player stands near an active Campfire or a powered Oven. Both buffs prevent the player from freezing during a snowstorm. Additionally, the heat from a Campfire or Oven is required for certain crafting recipes, such as cooking food or producing glass.

The effect of a deadzone can be temporarily negated by wearing a radiation-filtering mask, such as a Gasmask or Biohazard Hood. These require a Filter to be attached and regularly replaced in order to provide protection.

The effect of the burning debuff can be negated entirely by wearing a set of fireproof clothing, such as both the Firefighter Top and Firefighter Bottom.