PEI (an abbreviation of Prince Edward Island) is a playable map in Unturned (version 3). Prince Edward Island is located off the southeastern coast of Canada. It consists of one main island surrounded by five smaller islands. The terrain is reflective of a temperate biome with a variety of trees, bushes, and grass, and the coastlines are lined with sandy beaches. A majority of the marked locations on the two largest islands are connected by a main road. Unlike its real-life counterpart, the map has a lot of hilly terrain. The Canadian mainland is visible in the distance, but it is impossible to reach.

The map is primarily focused on player-versus-environment (PvE) gameplay, although the presence of two military locations as well as the bunker at Holman Isle create opportunities for player-versus-player (PvP) gameplay. 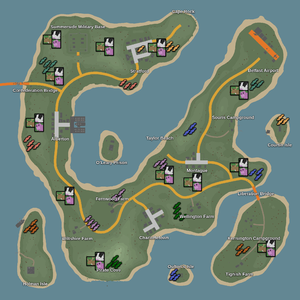 Marked map of flora and fauna spawns in PEI.

There is a diverse variety of tree genera in PEI. Players can find birch, maple, and pine trees. Birch and maple trees are equally distributed across all of the islands. However, pine trees can only be found on the smaller of the two main islands. The O'Leary Prison island is entirely devoid of trees.

PEI is home to Cows, Deer, and Pigs. These animals can be found in a total of twelve different locations across the two largest islands, often spawning in herds. Eleven of the spawn areas are found on the larger island of the two, with only a single spawn area being present on the smaller island. The largest possible size of a herd from a single area would contain five animals.

Fauna can be found grazing between Cape Rock and Stratford, just south of the bend in the connecting road. Fauna can also spawn directly west of Stratford, on the steep hills that border the Summerside Military Base. Directly to the west of the military base is another grazing location. There is a large clearing to the north of the road that leads onto the Confederation Bridge, and generally southwest of the main entrance into the Summerside Military Base, in which fauna can be found.

Directly west of Alberton's road intersection are steep, wooded hills where fauna can spawn. There is another grazing spot at the narrowest part of the island, just south of the road between Alberton and the nearby wheat farms. Fauna can spawn about the Pirate Cove, grazing slightly towards the western side of the cliff.

Similar to the Summerside Military Base, there are multiple areas around Montague where fauna can spawn. Directly to the south of the Taylor Beach parking lot is a clearing where animals may spawn, often grazing around the southern part of the clearing. Fauna can also spawn directly to the south of intersection in Montague, in the center of another large clearing. To the east of Montague, just north of the road bend that leads onto the Liberation Bridge, animals can be found grazing. The rest of the area to the north of Montague is rather bare, with only a single grazing spot that is located roughly in the middle of woods between Souris Campground and Belfast Airport.

There is one location on the smaller island where fauna can be found. They can spawn east of the road that connects Tignish Farm to Kensington Campground, grazing by the trees just before the woods open up to the coast.

Sometime in mid-1947, a military official retired from his work and moved to Montague, PEI after the government created falsified accounts regarding two UFO crashes that had resulted from the military firing upon the saucers.

On January 2, 2016, Dr. Behan—a Scorpion-7 employee—was evicted from his home in Alberton for unspecified reasons.

Scorpion-7 originally had a laboratory on the second largest island of PEI, and was working on a DNA splicing project. The local government eventually began investigating the laboratory. On January 3, the head of the facility began making plans with headquarters to relocate to a new facility in either Washington or British Columbia. Some employees, however, were reassigned to other facilities to work on other projects. When Scorpion-7 left PEI, Tignish Farm was built in its place.

Dr. Behan was reassigned to the Yukon facility, to work on a project contracted by Big J. Dr. Behan's dog, Spot, was left with the family that moved into Tignish Farm. Although not all of the family member's names are known, the parents' daughter is named Laura. Laura's family have memories of living in Montague, but are unsure of how accurate the memories are. In actuality, Laura and her family used to live in Washington before Scorpion-7 removed their farmhouse to make a new facility.

One night, a mission briefing reported of a highly contagious virus coming into and sweeping through Canada. Before a sudden termination of communication, the federal government ordered the destruction of the Confederation Bridge in an attempt to prevent the spread of the virus to PEI. A military unit was assigned to the bridge with any munitions needed at their disposal. They succeed in destroying the bridge, but the virus spreads into PEI regardless.